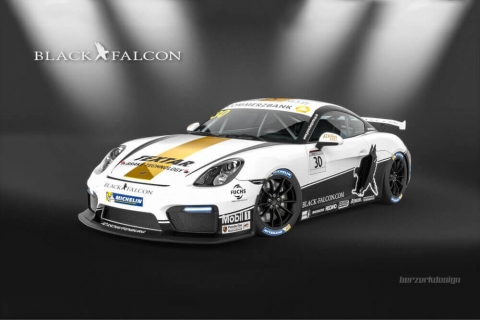 In contrast to the manual transmission series model, the Cayman GT4 Clubsport has a 6-speed PDK dual clutch transmission. It is powered by a 3.8 litre six-cylinder boxer engine with 385 hp. In addition to an antilock braking system for racing cars, it also features an ESP system optimized for the racetrack (Porsche PSM). Probably the biggest changes to the series model were made in the area of the axles and brakes. The front and rear axles primarily make use of components from the Porsche 991 GT3 Cup. These adaptations can be felt particularly strongly on the front axle, as the car steers precisely and gives the driver a lot of feedback. Even the brake system makes use of components from the Porsche 991 GT3 Cup, which have been installed on the front and rear axles. Similarly to the GT3 Cup, a brake booster is not used. These modifications make the Porsche Cayman GT4 Clubsport a true racing vehicle, which demands a great deal of its drivers and at the same time helps them master further challenges.

The new Porsche Cayman GT4 Sports Club is used by BLACK FALCON in the VLN Endurance Championship Nürburgring and the Porsche Sports Cup Germany. The Cayman GT4 Clubsport is thus suitable for long-range as well as sprint racing.