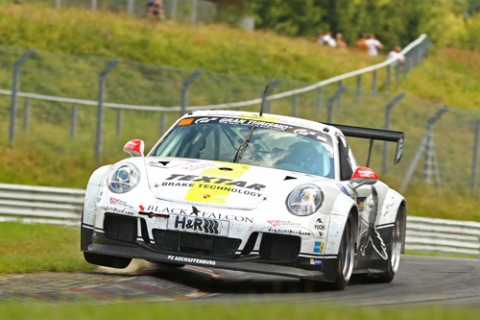 On the basis of the Porsche 991 GT3 Cup, Black Falcon developed a victorious car during the 2015 season, which became the measure of all things in the SP7 class of the VLN Endurance Championship. In addition to modifications that affected the aerodynamics of the vehicle, the shape of the fenders was changed, so that wider tyres and wheels could be fitted on the front and rear axles.

With these upgrades the dominant position in the SP7 class was underlined and the team managed several top 10 positions in the overall ranking.

The “991 CUP BF” is currently the spearhead of the CR team. Due to the high level of reliability and speed, this car has become a guarantor of success for Black Falcon – and the drivers love their “white rocket” anyway.