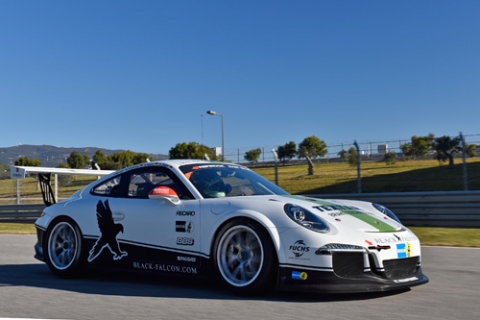 Around the globe, the production-based race car on the basis of the seventh generation of the 911 sports car icon is driven in the Porsche Mobile 1 Supercup, in the worldwide Carrera Cups as well as the most important GT3 Cup Challenges. In addition, as part of the VLN Endurance Championship, a Cup competition is also held.

Developed by Porsche Motorsports, the 991 GT3 Cup is characterized by its reliability. The use of an endurance package ensures that even 24h races can be completed without technical problems.

The new model, the 991, had its debut for Black Falcon in January 2015. The team started at the 24h race in Dubai with 2 brand new 991 GT3 Cup cars and dominated the Cup class at will. The team secured pole position and a clean double victory.

Compared to the previous version 997 CUP, the handling was significantly improved in particular – the drivers appreciate the precision with which the 991 GT3 Cup takes corners.

A modern safety cell and the Recaro P1300 GT bucket seat are a part of the standard configuration just as much as the sequential 6-speed transmission with paddle-shift.

In the VLN version the 991 GT3 features ABS and a Bilstein suspension, in the Porsche Sports Cup the car is handled with a Sachs suspension and no ABS, like in the Porsche Carrera Cup, which is a challenge for any driver!