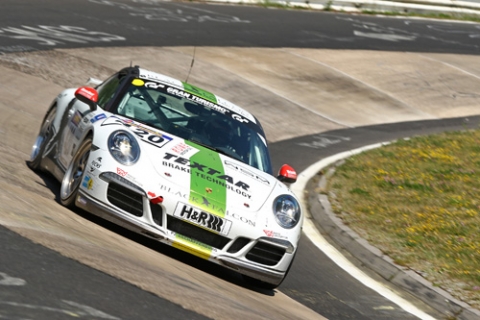 The Porsche Carrera is used in the V6 class of the VLN Endurance Championship and the RCN. The V stands for production cars. This means that certain components such as powertrain, bodywork, a large part of the electronics and a part of the braking system may not be altered compared to the series vehicles. The car is equipped with safety features such as a welded safety cell made of special steel, as well as the latest racing bucket seat P1300GT by Black Falcon partner Recaro. Brakes and suspension have been equipped with components by our partners Pagid Racing and Bilstein in order to ensure the maximum performance of the vehicle. Ex works the 991 Carrera has a 7-speed PDK transmission and a race grade ESP system (Porsche PSM).

The 991 is raced in the strongest V6 class of production cars in the VLN. The winner is thus given the possibility of spraying champagne on the large winner podium after the race.

The VLN lap record in the V6 class (an incredible 8:59 min) was also achieved in a Carrera.

In contrast to the Cayman V6, the Carrera has another vehicle concept. In the Carrera, the engine is installed in the rear as is typical for Porsche. As a result, the Carrera is the ideal intermediate step and the best preparation for the 991 GT3 Cup.