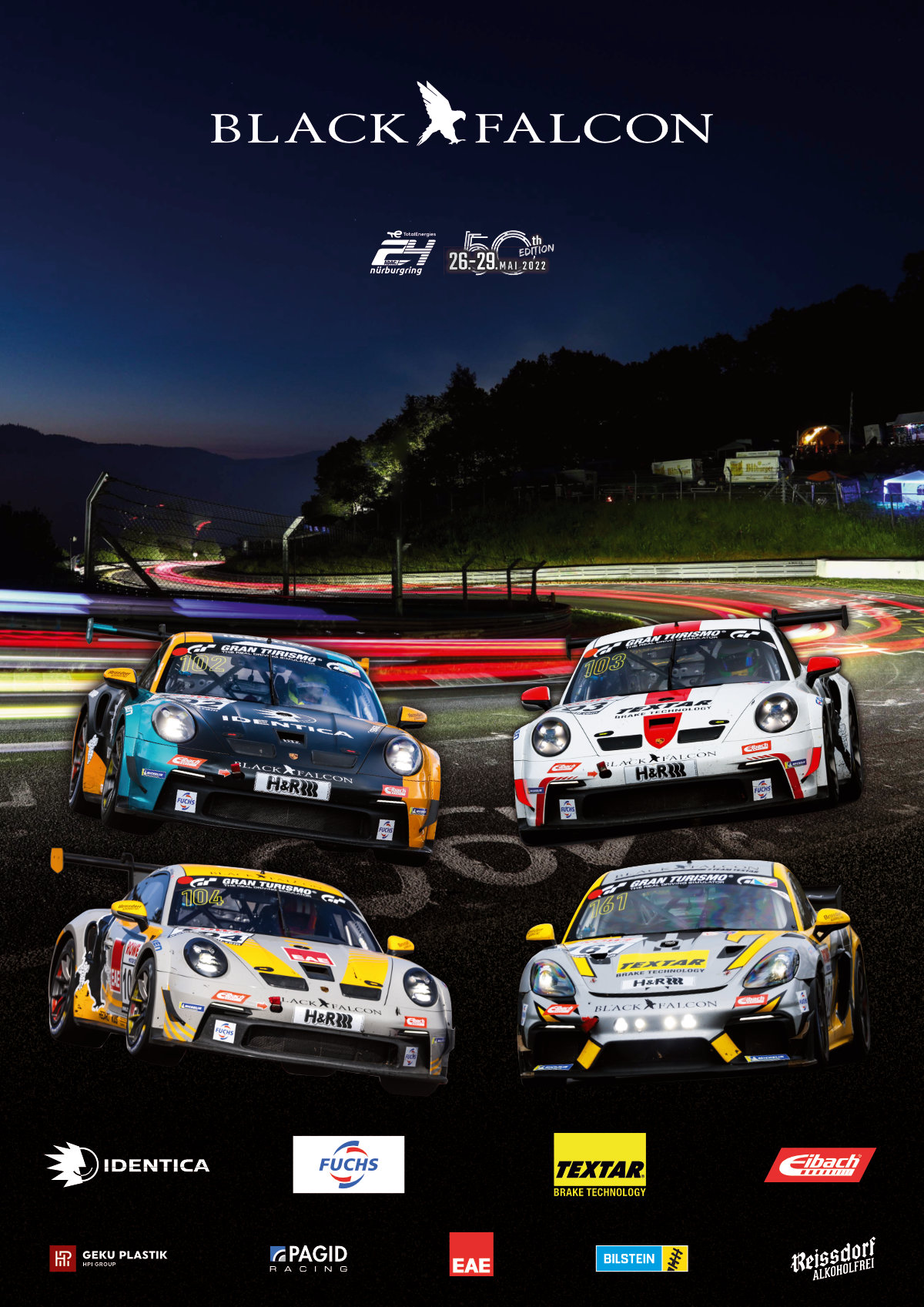 BLACK FALCON competes in the 50th anniversary of the ADAC 24h Race Nürburgring with a strong line-up of four cars. For the first time, the team from Meuspath at the Nürburgring will enter three Porsche 992 GT3 Cup cars in the CUP2 class. The team is also fielding the new Porsche Cayman GT4 RS Clubsport in the SP10 class for GT4 vehicles.
The "biggest car race in the world" will take place next weekend (28/29 May) on the 25.378 km combination of the Grand Prix circuit and the Nordschleife of the Nürburgring. Up to 200,000 fans are expected to attend the 24-hour marathon, and after two years of the Corona pandemic, they will finally be able to create a party atmosphere around the Nordschleife again. The 27-hour live coverage by RTL NITRO will set a new record for the world's longest live TV broadcast.

BLACK FALCON Team IDENTICA
The BLACK FALCON Team IDENTICA starts with great ambitions and an excellent line-up at the season highlight on the Nordschleife. As usual, IDENTICA drivers Paul Harkema and Tobias Müller will be in the cockpit of the Porsche 992 GT3 Cup (#121) at the endurance classic. The duo, who already achieved an NLS class victory in preparation, will be supported by two fast and experienced top drivers in Noah Nagelsdiek and Tim Scheerbarth at the 24h race. Nagelsdiek already completed the entire 2021 season as an IDENTICA Junior and made his debut in the BLACK FALCON GT3 Porsche at the end of the 2021 season. Scheerbarth competed for BLACK FALCON Team IDENTICA most recently in 2019 and - together with Tobias Müller - won the VLN championship title in the SP10 class at that time. The quartet will compete in the extremely strong CUP2 class within the newly announced "Porsche Endurance Trophy Nürburgring".

BLACK FALCON
Also in the CUP2 class, two Porsche 992 GT3 Cup cars will be competing under the banner of BLACK FALCON at the big 24-hour jubilee. The 911 with the starting number 122 is shared by Peter Ludwig, double starter Noah Nagelsdiek, Reinhold Renger and Maik Rosenberg. Ludwig, Nagelsdiek and Rosenberg are contesting the entire 2022 NLS season in the Cup 2 vehicle and were able to clinch victory in the AM classification at the 3rd round of the NLS at the end of April. For the 24-hour marathon, the experienced Reinhold Renger joins the well-rehearsed trio. Ben Bünnagel, Mustafa Mehmet Kaya, Gabriele Piana and Mike Stursberg will start in the car with the starting number 123. As in the sister car, three of the four drivers are sharing the 992 Cup throughout the NLS season. Kaya, Piana and Stursberg already clinched the AM classification of the Porsche Endurance Trophy Nürburgring at the NLS season opener, which has so far been firmly in the hands of the BLACK FALCON drivers. With Ben Bünnagel, the trio will be supported by the two-time 24h CUP3 class winner in 2020 and 2021.

BLACK FALCON Team TEXTAR
The BLACK FALCON Team TEXTAR will start with a Porsche Cayman GT4 RS CS (#85) in the SP10 class for cars according to SRO GT4 regulations. In the SP10, GT4 vehicles from different manufacturers are brought to the same lap time level through the so-called "Balance of Performance" by means of minimum weight, tank volume and maximum power. In this year's edition of the 24h race, a total of eight excellently equipped vehicles from four different manufacturers will be competing. In the fight for the podium places, the TEXTAR Cayman will be driven by Martin Meenen, Marco Müller, Carsten Palluth and Tobias Wahl. Müller, Palluth and Wahl were already victorious at the NLS season opener and drove to second place at the last preparation race, the ADAC 24h Qualifiers. With Martin Meenen, another BLACK FALCON regular driver joins the well-rehearsed trio.

Alexander Böhm, Managing Director BLACK FALCON:
"This is the 17th time that BLACK FALCON will be at the start of the toughest race in the world, but this year's 24-hour marathon is still something very special: after two years of pandemic-related restrictions, we can finally look forward again to packed grandstands, tens of thousands of fans around the Nordschleife and, last but not least, numerous guests on site in our Tower Lounge.
After weeks of intensive preparation, we are looking forward to a great and exciting race. We wish our drivers every success and our partners, guests and fans lots of fun at the big anniversary race around the clock!

Timo Frings, Head of Motorsport at BLACK FALCON:
"The 24h race at the Nürburgring is our absolute highlight of the season every year. We compete with fast and experienced driver pairings and are very well prepared as a team. The competition is very strong in both classes, but we expect all four cars to have a chance of reaching the class podium. The newly created "Porsche Endurance Trophy Nürburgring" has already provided plenty of action in the NLS. At the 24-hour race, some of the cars in the Cup 2 class are of such high quality that otherwise only GT3 cars are fielded. In the SS 10 class, too, the competition is stronger than ever before. We gladly accept the challenge and can hardly wait for the event!"

On the social media channels of BLACK FALCON you can find continuous updates about the current season: