BLACK FALCON celebrates a premiere: for the first time in the team's history, the squad from Meuspath starts at a race on the legendary Circuit des 24 Heures in Le Mans. In the context of the world-famous 24-hour race, the Porsche Carrera Cup Deutschland kicks off its season this weekend (18-19 September). This year BLACK FALCON will once again be competing in Germany's fastest one-make cup and will be competing in the Carrera Cup together with Carlos Rivas for the fourth year in succession. The Luxembourger is the reigning champion in the ProAm classification, the class for non-professional racing drivers within the cup, which is fiercely contested by youngsters and professionals, and has been a permanent member of the BLACK FALCON Team TEXTAR since BLACK FALCON entered the Carrera Cup in 2017. At the Le Mans race, Rivas' 485 hp Porsche 991 GT3 will bear the starting number 106 instead of the regular starting number 6.

The reason for the number change is a spectacular event: For the season opener in Le Mans, the German one-make cup will merge with the Porsche Carrera Cup France to form an impressive starting field. A total of 53 Porsche 911 GT3 Cup cars will share the 13.626 kilometre long track, most of which runs along public country roads and is famous for its long straights and high-speed passages. Thanks to its unique characteristics, the circuit offers ideal conditions for spectacular slipstream duels and close fights. The 45-minute race starts on Saturday morning at 9:15 a.m. local time and will be broadcast live on free-TV on "SPORT1" in Germany.

"We are excited about the season opener and enter the season with great ambitions. Together with Carlos we want to defend the ProAm title and this year we also want to get as far forward as possible in the overall standings. Therefore, we have been testing a lot in the last weeks and only last weekend we did a race in Cup specification without ABS. Le Mans is of course a special challenge due to its special characteristics and the huge starting grid, but we are perfectly prepared and are looking forward to a spectacular weekend," said BLACK FALCON team principal Timo Frings before leaving for France.

After the race in Le Mans, a total of 10 more races will follow in just five weeks:

The Porsche Carrera Cup Deutschland is again relying on an extensive media package for this season. All races will be broadcast in full length on Sport1. Furthermore, the channel n-tv will report in the magazine "PS - Porsche Carrera Cup". The programme runs every Saturday (from 11:30 a.m.) and Sunday (from 7:30 p.m.) after the race weekends. All races are also shown live on the Internet: fans can follow the races via the Facebook account @CarreraCupGermany, the official YouTube channel of the one-make cup and the Porsche Motorsport Hub. 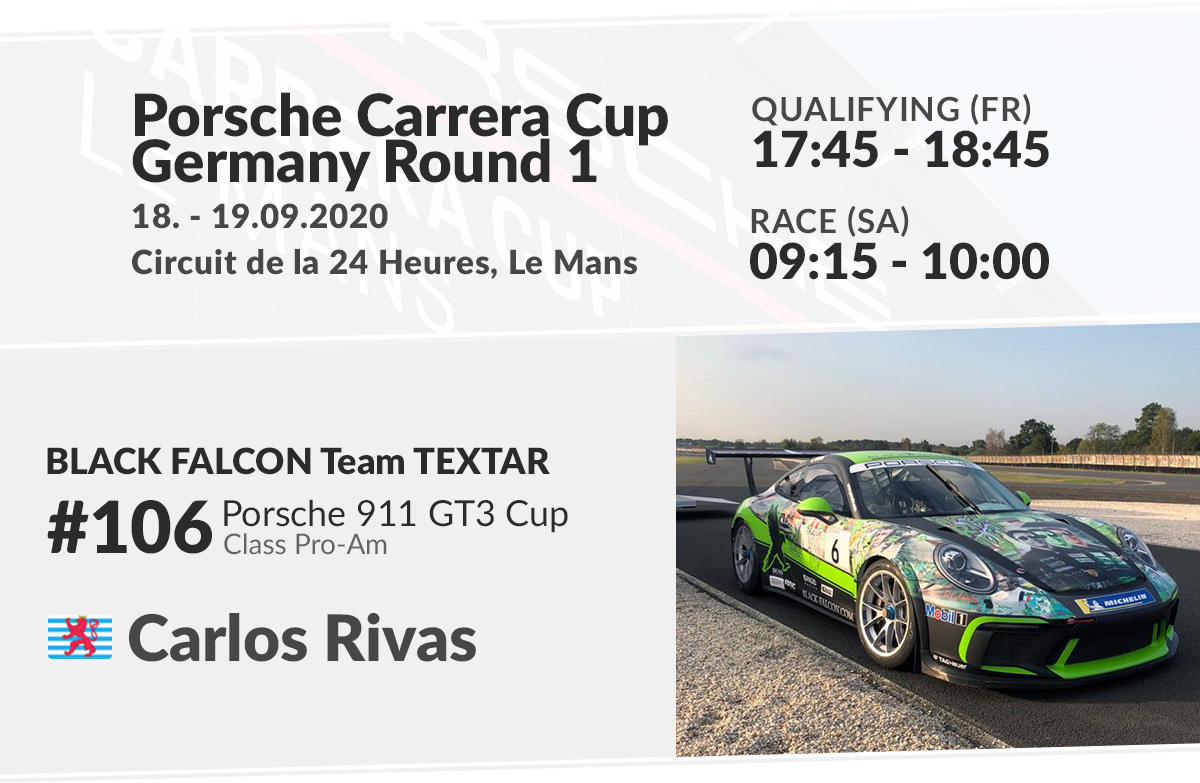 TOP
Cookies make it easier for us to provide you with our services. With the usage of our services you permit us to use cookies.
More information Ok