The stage is set for the marathon in the "Green Hell"

This week, the big highlight of the season for BLACK FALCON is on the agenda with the 24-hour race at the Nürburgring. After an intensive and successful preparation phase - including five rounds of the Nürburgring Langstrecken-Serie (NLS) - the team from Meuspath will enter three excellently staffed cars in three different classes this coming weekend. The BLACK FALCON Team IDENTICA Porsche 911 GT3 Cup MR (#35) in the SP-PRO class will head the line-up. In the SP8T class the Mercedes-AMG GT4 (#38), this year's unbeaten series winner in the NLS, will start for the BLACK FALCON Team TEXTAR. The line-up will be completed by the TEXTAR-Porsche Cayman GT4 (#306) in the CUP3 class. For BLACK FALCON it is already the 15th participation in the long distance classic at the Nürburgring. The 24-hour race is broadcasted by the free-TV station RTL Nitro as well as by live stream around the clock. In addition, the new website https://live.black-falcon.de will be available from Thursday onwards to provide information about the BLACK FALCON cars.

The legendary 24-hour race at the Nürburgring is the annual highlight of the Nordschleife calendar. Unlike at the NLS, the 25.378-kilometer combination of Grand Prix circuit (without Mercedes Arena) and Nordschleife is in operation. This year, up to 100 vehicles will be at the start of the 48th edition of the classic, which will tackle the probably toughest race in motor sports on Saturday afternoon at 3:30 pm. Worldwide TV broadcasts and live streams transport the spectacle around the Nürburg directly into the living rooms of the huge fan community.

BLACK FALCON Team IDENTICA (#35)
In the first two years of the partnership between IDENTICA and BLACK FALCON, the team celebrated two victories (2018, 2019) in the SP10 class for GT4 vehicles with the IDENTICA-Mercedes-AMG GT4 at the 24-hour race as well as winning the VLN-GT4 Championship in 2019. After the great successes with AMG, the team switched to the Porsche 911 GT3 Cup MR SP-PRO for the 2020 season, which was already extremely successful in the preparation phase for the 24-hour race with four class victories in five NLS races. Marek Böckmann, Tobias Müller, Carlos Rivas and Maik Rosenberg take turns at the wheel of the over 500 hp Porsche with starting number 35. The quartet was already driving in this formation during the last endurance test before the 24-hour race, the NLS 6-hour race four weeks ago, secured the class victory in the SP-Pro and also beat one third of the cars in the GT3 top class SP9.

BLACK FALCON Team TEXTAR (#38 and 306)
The BLACK FALCON Team TEXTAR is celebrating a special anniversary this year: For the tenth time, BLACK FALCON and TEXTAR will compete under their own team name at the 24-hour race at the Nürburgring. Since the first race in 2011, the team has already celebrated 12 class victories at the endurance classic in the Green Hell. This year two more could be added: The Mercedes-AMG GT4 with the starting number 38 will start in the SP8T class, the class with the highest displacement with turbocharger. At the wheel, Mustafa Mehmet Kaya, Reinhold Renger, Mike Stursberg and Tristan Viidas take turns. In the NLS, the team has secured all five class victories so far this year with changing driver crews and will therefore start the race as the big favorite. In the second TEXTAR vehicle, the Porsche 718 Cayman GT4 CS with start number 306, Ben Bünnagel, "Max", Florian Naumann and Michael Rebhan will be racing. The quartet is starting for the first time in this composition, but combines various 24h class victories and NLS successes. In 2007 Michael Rebhan was one of the four pilots who achieved the first ever class victory for BLACK FALCON in the 24h race. The powerful team starts with the Cayman in the CUP3 class, in which only Porsche Cayman GT4s compete, and has its sights set on the podium.

Quotes before the race

Timo Frings, Head of Motorsports BLACK FALCON: "The 24-hour race at the Nürburgring is the absolute highlight of the season for BLACK FALCON every year. A glance at the weather forecast, which announces several rain showers during the course of the race, promises to be a special challenge. We are well prepared and will give everything to get our cars on the podium".

Alexander Böhm, Managing Director BLACK FALCON: "The 24h-Race Nürburgring 2020 is a great anniversary for us in many respects: For me personally, it is the twentieth 24h-Race Nürburgring as driver or team boss, for BLACK FALCON it is the 15th start of the endurance classic. Since the first 24-hour race in 2006, BLACK FALCON has been racing with suspension technology from BILSTEIN. This year we are celebrating the tenth 24h anniversary with our partners Fuchs, Reissdorf non-alcoholic and TMD Friction. For five years now we have been entering the 24h race together with our partner Eibach, and since 2018 we have also been working extremely successfully with IDENTICA.

With 21 class victories and two overall victories, BLACK FALCON has become one of the most successful teams in the history of the Eifel classic during this time. This was only possible thanks to the successful cooperation with our partners, for which I would like to take this opportunity to thank them very much.

We are looking forward to the season's highlight next weekend and will do our utmost to add another successful chapter to our 24-hour history.

There will be constant updates on the BLACK FALCON social media channels all around the season highlight: 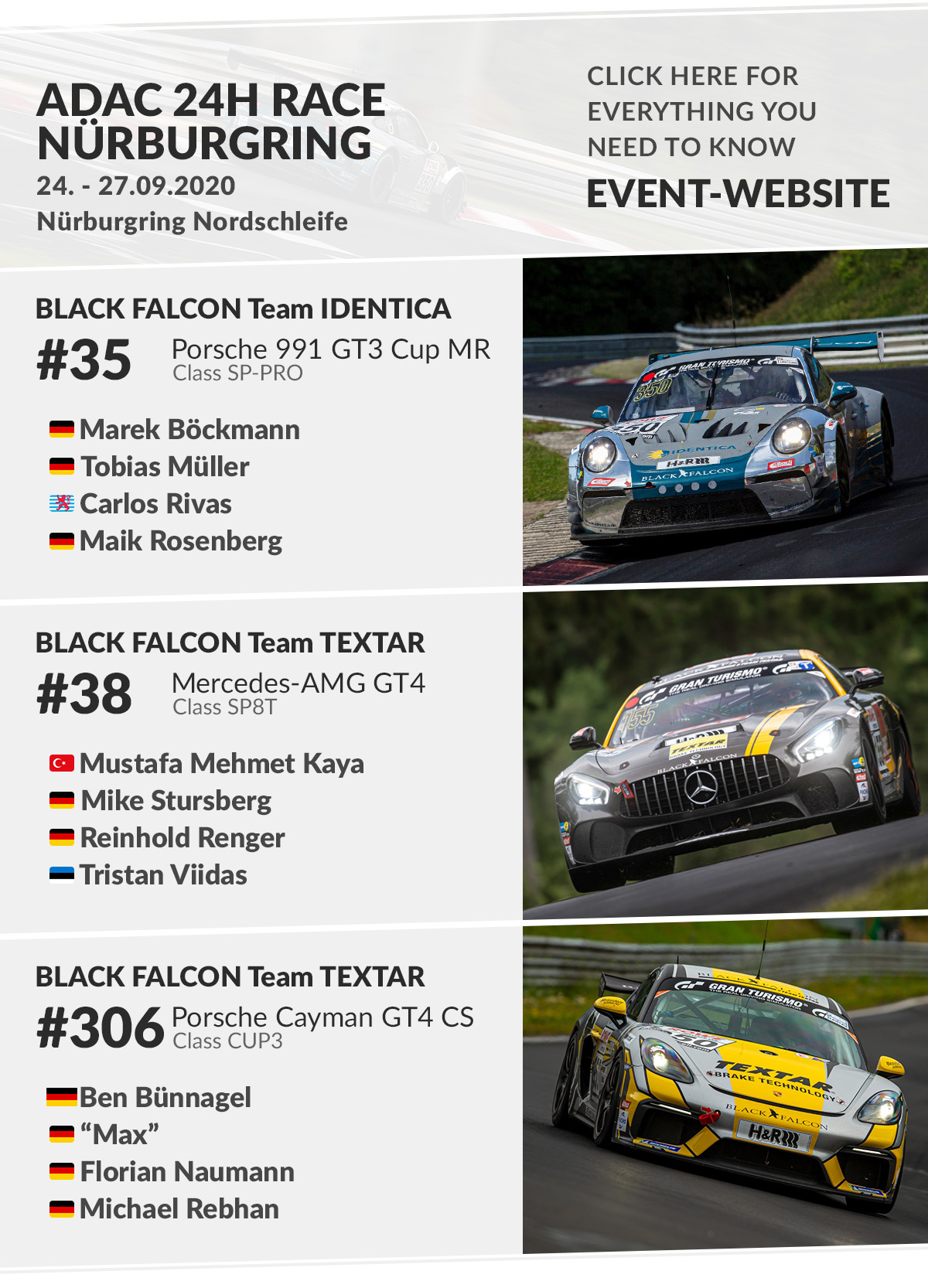