BLACK FALCON celebrated two class victories at the six-hour race of the Nürburgring Endurance Series (NLS) last Saturday (29.08.) The IDENTICA Porsche 911 GT3 Cup MR SP PRO with the starting number 350 was once again the best placed vehicle outside the GT3 class and took the impressive 22nd overall position in the top-class field, leaving behind a third of all 33 GT3 cars on the grid. In the SP8T, the number 155 TEXTAR Mercedes-AMG GT4 celebrated its fifth class victory in a row and remains unbeaten in the 2020 season. At the same time, the AMG GT4 secured the outstanding 27th overall position at the NLS season highlight and completed the perfect team result as the second best car outside the GT3 class.

The Porsche 911 GT3 Cup MR SP PRO of the BLACK FALCON Team IDENTICA started at the NLS season highlight for the first time with a slightly changed crew. The three regular drivers Marek Böckmann, Tobias Müller and Carlos Rivas were joined by Maik Rosenberg, who made his debut at the wheel of the "SP-PRO" version of the Porsche 991 this weekend, as fourth driver. In a highly thrilling race, the team fought lap-long duels with various GT3 cars and, thanks to a highly concentrated and flawless performance, continuously worked their way forward. After six hours of racing distance, the IDENTICA Porsche crossed the finish line in the outstanding 22nd overall position amidst the more than 30 GT3 cars that started. Already for the fourth time this season the Porsche 991 GT3 Cup MR SP PRO finished an NLS race as class winner and as fastest car outside the GT3 category.

In the SP8T, "Max", Marco Müller, Stephan Rösler and Tristan Viidas fought a close duel for class victory in the BLACK FALCON Team TEXTAR Mercedes-AMG GT4 from the very beginning. Starting from third position, the AMG GT4 took the lead in the class right from the first hour of the race thanks to a fantastic starting stint. In the course of the race, the team continued to extend its class lead and at the same time captured position after position in the overall classification. After 38 laps, the AMG GT4 was finally waved off as winner of the SP8T class and 27th overall. The quartet of drivers thus brought the BLACK FALCON Team TEXTAR its fifth SP8T class victory in a row.

"We are highly satisfied with our performance at the NLS season highlight," said Timo Frings, Head of Motorsport at BLACK FALCON. "The team has achieved all the targets we had set before: we won the respective class with both cars, the IDENTICA-Porsche was again the fastest car outside the GT3 class and the TEXTAR-AMG this time even the second fastest non-GT3 car. In addition, we are still unbeaten in the SP8T class after 5 races in the season. Many thanks to the whole team for the perfect weekend!

Unfortunately, the majority of our drivers are still unable to enter the country due to Corona restrictions. But we are very happy that for the first time spectators were allowed at NLS again. Another highlight were the live pictures from the helicopter, a great advertisement for the NLS! We feel well prepared for the 24h race in four weeks, where we will start with at least three vehicles".

The next round of the NLS will take place on October 24th. The 45th DMV Münsterlandpokal covers the usual distance of four hours. Before that BLACK FALCON will compete in the legendary 24-hour race at the Nürburgring. The endurance classic is scheduled for the last weekend of September (24-27 September). Detailed information will follow shortly on the social media channels of BLACK FALCON: 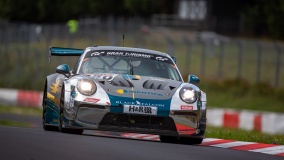 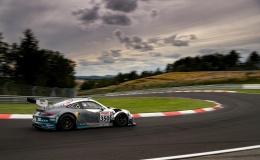 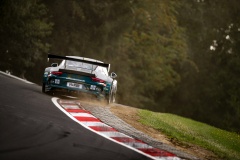 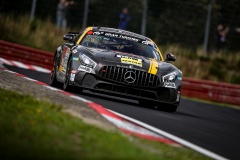 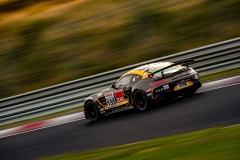 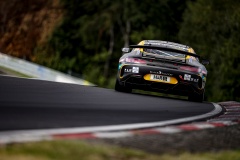